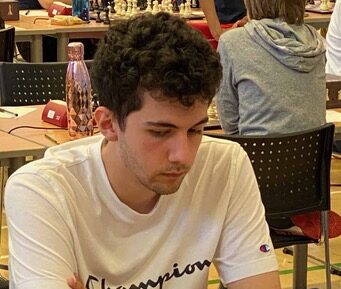 Thanks to the generous financial support of various sponsors, including The Chess Trust, The English Federation, The Friends of Chess, Northumberland Chess Association, Northumbria Junior Chess Association and an anonymous donor, the 2022 Northumbria Masters Congress took place successfully from 26-30 August at St. Mary’s Catholic School, Newcastle upon Tyne NE7 7PE.

This sponsorship was highly instrumental in our event going ahead and in securing its future.

The Masters Open, with a total of 67 players, was won jointly by IMs Brandon Clarke and Marcus Harvey (both England) on 7.5/9.

The GM norm all-play-all was won by IM Matthew Wadsworth (England) on 6.5./9.

The IM norm all-play-all was won jointly by Fischer and Dong on 6.5/9.

The Challengers (Under 2000 FIDE) tournament, with a total of 41 players, was won jointly by Robert Sanders (England) and David Geaney-O’Brien (Ireland) on 7.5/9.

The Junior Rapidplay, with a total of 22 players, was won by Kenneth Hobson (England) with 4.5/5.

A total of 15 female players took part in the Congress, including 13 England players.

(Details are available on pages 2 and 3 of the attached excel document.)

(Details are available on Page 4 of the attached excel document.)

A number of bursaries were awarded by the Congress and the John Robinson Youth Chess Trust to young players to help with their entry to the Congress.

Next year, it is planned that the Northumbria Masters Congress will take place over the August Bank Holiday weekend (24-28 August, 2023) at the same venue (St Mary’s Catholic School, Newcastle) and with a similar range of tournaments.