Chess is coming home… to Newcastle! 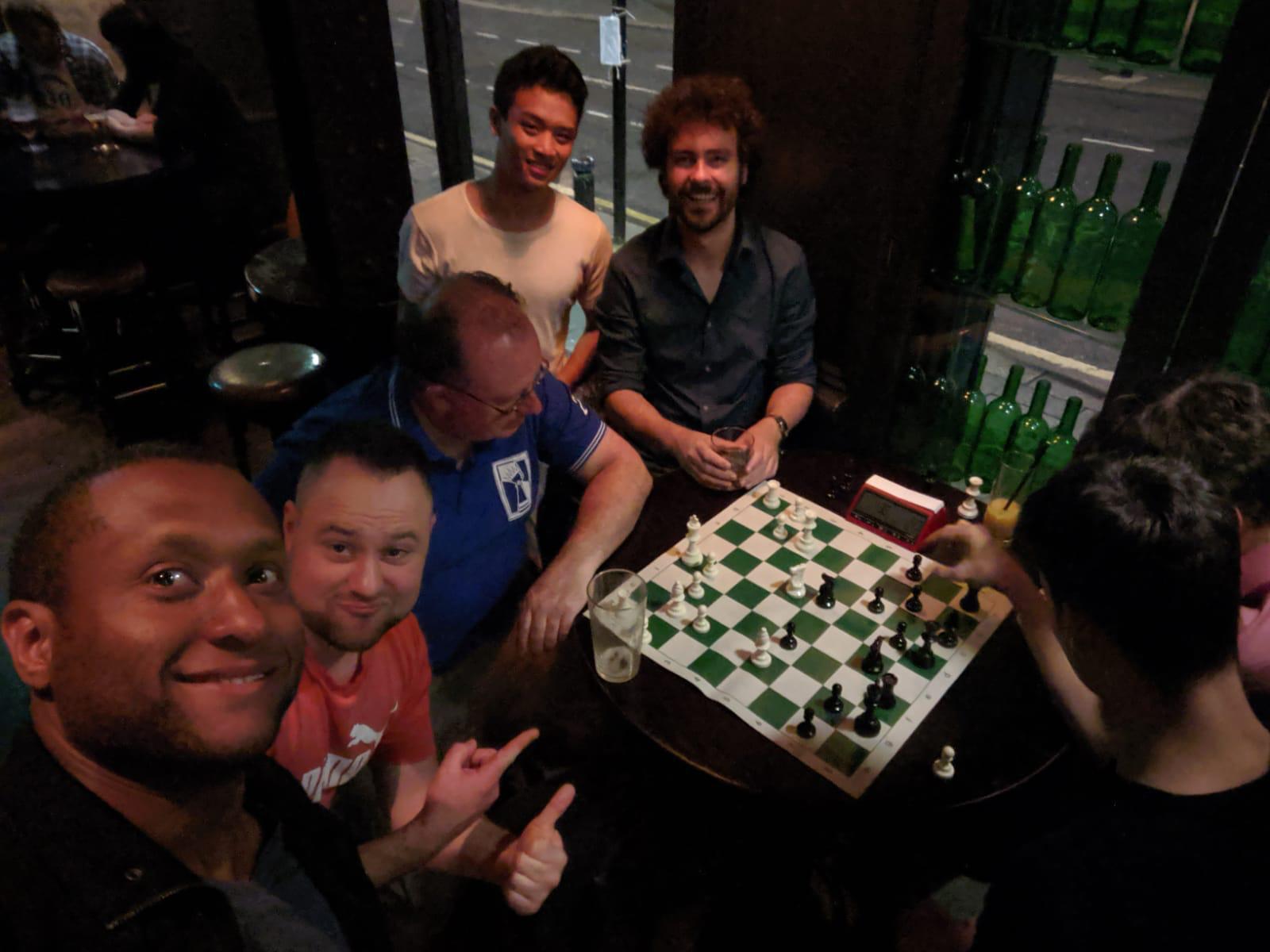 For its second reborn edition, the Northumbria Masters left the famous Chillingham Arms to move to a bigger venue – remaining a major hit.

I’d walk the streets all day all neet,

For a bottle o’ the River Tyne.

I wish I’d never been away,

I’d kiss the ground for the welcome sound,

Of me mother saying, ‘Hinny, howay!’”

As a junior chess player in the North East of England in the recession-era 1980s, first on Teesside and then in Newcastle upon Tyne, I quickly got used to the idea that to play in big tournaments, you had to travel to London, far-flung seaside resorts or other places mostly in the south of England.

Events such as the Lloyds Bank Masters were all expensive away fixtures, and the epicentre of UK chess seemed a long way away. Almost in desperation, I started organising international tournaments in Newcastle in the mid-1990s.

I felt that, while we didn’t have the strongest players in the world, we could at least ‘bring coals to Newcastle’ and help young local players to get the chances they were lacking.

I started with my local pub, The Chillingham Arms, asking the manager after a boozy quiz night whether we could hold a chess event in his upstairs function room. Much to my surprise, the room hire was just £10 a day, and a series of great tournaments took place.

To say they were run on a shoestring would have been a big understatement, as they were literally organised from entry fees and the odd helpful donation from The Friends of Chess and then-BCF International Director David Sedgwick’s budget.

The titled players (and pretty much a majority of the other players, as I vaguely recall) simply stayed in local players’ homes. Among the future stars staying in mine and my friends’ spare rooms, on sofas and even on floors in sleeping bags, were such luminaries in the making as Jacob Aagaard, John Shaw and Danny Gormally.

Lara Barnes, now the ECF Chief Arbiter, was cutting her teeth in her first tournaments as an arbiter, and among the youngsters playing their first international tournaments were a certain future British champion, Gawain Jones, then aged 9, and Indian superstar commentator Tania Sachdev, then aged 10.

It is the most horrible cliché, but it was true to say, as the Monty Python ‘Four Yorkshiremen’ sketch put it,“We were poor, but we were happy.”

A number of players made their first IM norms, including Danny Gormally and even myself – how I managed that while also organising a tournament is a complete mystery to me.

The events, some all-play-alls, some Swisses, were a bit rough and ready, but they were great fun. Not to toot my own horn too much, but even today everyone I speak to remembers those events with great affection.

It was not just the chess, but the camaraderie, the atmosphere and the feeling that we were all mucking in together.

One occasion that particularly sticks in my memory was over Easter 1996, when future ‘Sniper Master’ Charlie Storey was trying to win some long endgame upstairs in the pub, while downstairs in the bar what seemed like hundreds of Newcastle United supporters were roaring as the Premier League title literally slipped from their grasp, and ill-fated manager Kevin Keegan uttered his immortal “I would love it if we beat them…” rant against Manchester United’s Alex Ferguson.

We chessplayers oscillated between watching the epic football match downstairs, and Charlie’s heroic attempts to win his endgame upstairs…

My Years in Exile

Then, six months later, my time in Newcastle came to an abrupt halt, as I was lured away down south to London to work for Murray Chandler’s British Chess Magazine.

Three years later – somewhat bizarrely – I went further afield to the great chess nations Azerbaijan and Russia, where I became a mainstream media journalist and editor.

Ironically, in the great chess cities of Baku and Moscow, due to my work schedule I had little time for the game – despite in 1999 interviewing a 12-year-old Teimour Radjabov, and once enduring an epic, all-night vodka drinking marathon with Russian Grandmasters at the 2014 Sochi World Championship match.

Some 20 years later, like the Geordie expat brickies from the classic TV series ‘Auf Wiedersehn, Pet,’ it was finally time for me to ‘Come home, Newcastle’ in 2016.

Much as I had enjoyed an interesting and mostly fulfilling career working abroad, it was a highly emotional change in my life. The feelings that I experienced, as an economic migrant ‘exiled’ from the North East, have of course been experienced by many millions elsewhere, but there is nothing like returning home – and finding, like Michael Caine in the classic 1971 Newcastle noir gangster film ‘Get Carter,’ that so much of that old world had gone forever, even while some of the old places and faces remained the same.

Except I and my Newcastle friends were just much, much older. Almost like, as in the words of the ‘Coming Home’ song, “Ah might as well ha’ been in jail…”

Putting the Band Back Together

About a year after I’d come back to Newcastle, it was none other than Charlie Storey who suggested in an offhand comment, “Why don’t you hold another international tournament?”. The seed of an idea of ‘putting the band back together again’ took root, and I asked the manager of the self-same Chillingham Arms if his upstairs function room was available for a chess event.

I was again pleasantly surprised to learn that the room hire was just £25 a day this time… and in February 2018 the reborn Northumbria Masters took place in the pub, with seven GMs and 11 IMs in a strong field of 50 players.

Once again, the event benefited from the great work of Lara Barnes, and this time new sponsors were found, including the Liverpool-based company Capital Bridging Finance Solutions, the ECF, The John Robinson Youth Chess Trust, and the Friends of Chess. The budget was far bigger than in the 1990s, but in modern terms it was still an event on a shoestring – and it was only made possible by the efforts of a group of local volunteers, who again put up titled players in their homes and ferried them to and from the tournament each day.

This year, the 2019 Northumbria Masters in late August was an altogether grander affair, with a great new venue, Novotel Newcastle Airport, organised in conjunction with Bridge Overseas/Guaranteed Events Ltd.

This meant we could expand the number of players to 120 in four different sections, reaching maximum capacity in a large conference suite. The playing conditions were excellent, and all the players could enjoy a full trestle table per board to themselves and their opponent.

Like the 2018 and 1990s events, there was a great diversity in the makeup of the tournaments, with players from 11 different nations taking part. The Masters field of 52 players again was very strong, including a total of six GMs and six IMs. It was particularly pleasing to see some of the ‘original band members’ from the 1990s Northumbria Masters, GM Danny Gormally and FM Charlie Storey, back in action in the 2019 event.

The top seed, German GM Alexander Donchenko, got off to a flying 3/3 start, sharing the lead with newly titled Australia GM Justin Tan, who is a medical student in Edinburgh. The chasing pack on 2½/3 was led by GMs Roeland Pruijssers (Netherlands), Danny Gormally, Andrei Maksimenko (Ukraine), and Alexander Raetsky (Russia), along with IMs David Eggleston and Stephen Mannion.

The surprise player in the score group was England junior Armaan Gogia, who with a FIDE of 1754 was surely the most underrated player in the tournament.

The biggest upset in the early rounds was achieved by Newcastle’s 11-year-old Dutch-born wunderkind, Yichen Han, who defeated IM Alan Merry with a wicked swindle in round 2.

The middle rounds saw more jockeying for the lead between the GMs.

In the fourth round, Donchenko drew with Tan, allowing Pruijssers and Maksimenko to catch up on 3½/4. By the end of round 6, Donchenko and Gormally shared the lead with 5 points.

It was then that the top Dutchman, Roeland Pruijssers, took charge, showing great stamina and energy to finish with three straight wins, winning the tournament with an impressive 7½/9.

Despite starting with a draw (an inadvertent Swiss gambit), he was confident and solid throughout, deploying his favourite Dutch Leningrad to notch up wins against Gormally and Raetsky.

Donchenko came close to repeating his triumph at the 2018 Northumbria Masters, where he won with 7/9. This year his score was the same, but this time it was only good enough for equal second.

Joining him on ‘+5’ was Alan Merry, who bounced back from his early calamity to score a one-sided win over Gormally in the final round to clinch his prize.

The players in the Masters showed a great fighting spirit, with hardly any quick draws, even among the grandmasters. The event was also marked with a very friendly atmosphere, and this was typified by the impromptu blitz evening that took place after the last round, as Roeland Pruijssers, Alexander Donchenko and Justin Tan headed into Newcastle City Centre, joined by local club players Jose Grueso, Asa Bayram, Jack Erskine-Pereira and myself, and we played often-hilarious games of ‘Hand and Brain’ until the wee hours in a downtown bar.

The FIDE-rated Challengers (Under 2050/180 ECF) and Major (Under 1825/150 ECF) tournaments were also well supported, with many club players travelling to Newcastle over the Bank Holiday weekend.

It was particularly pleasing to see some 30 juniors playing in the 9-round FIDE-rated tournaments, many with the support of bursaries from the John Robinson Trust.

One notable local triumph was that of Alex Brodie, a Forest Hall clubmate of mine, who despite not being active recently in league or congress chess, won the Major unbeaten with the outstanding score of 7/9, despite being one of the lower rated players in the event.

To me, the success of this year’s Northumbria Masters showed that it is entirely possible to organise strong and attractive international tournaments in a city a fair way away from London.

To quote the baseball film Field of Dreams, if you build it, they will come.

One of the things that seemed to go down very well at this year’s event was the tourist excursions I organised for families and players who wished to take up to three half-point byes.

Two carloads of chess tourists enjoyed walking around the historic Durham Castle and Cathedral, the Vindolanda Roman Fort along Hadrian’s Wall, and – my personal favourite – Bamburgh Castle in Northumberland.

Against the backdrop of the Northumberland cliffs, after we toured the castle, we sat cross-legged on picnic blankets to watch as a richly-comic, open-air performance of Shakespeare’s The Tempest was performed by an all-female quartet of cycling actors, the aptly-named Handlebards.

I should, perhaps, offer a word to the wise for other would-be international tournament organisers in regional centres such as Liverpool, Leeds, Exeter and Norwich – It can be a huge undertaking, and one that requires quite some efforts from a team of dedicated volunteers to make it work.

But the payoff is the huge amount of positive feedback we have received about the event from players and families who would like to return next year.

I am glad to say that preparations are already well underway for next year’s Northumbria Masters, with the provisional dates of August 27-31, 2020.

We are hoping to include more excursions for players and their families, to make it again an enjoyable chess holiday – at the same time as being a serious and prestigious international chess festival.

These are likely to include a visit to Alnwick Castle, the famous location of the Harry Potter films…

For me, personally, the renaissance of the Northumbria Masters is about more than just retying the knot of history. It is hopefully a way in which chess at all levels can be revived in the various regions of the country – and serve as an example to other local organisers: If you build it, they will come.